One of my earliest posts spoke to our coming loss of Boomer.  We put her down a few days later, September 12, 2009.

Our plans around my sabbatical in Winter 2010 suggested to us that we should wait for our next dog.  And so we did.  But in late spring we welcomed Luna, a nine-week old yellow lab, into the family.  At midnight, Luna turns one.  And when last weighed is now 61 pounds of energy.

Luna is a sweet, sleek, athletic yellow lab.  Tobae hadn’t had a puppy before, but I had, and all other things equally she has been an excellent pup (this is a gentle way of saying Tobae has sometimes been pretty chagrined with her behavior).   She has become an accomplished mountain dog, especially fond of snow.  For students of genetics of yellow labs she has a pink nose, but is not a “Dudley”.  (And Tobae, *stop* calling her Pinky.)

Some highlights of her first year: 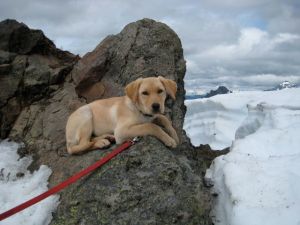 With her pooper scooper, July 4 weekend at Whistler: 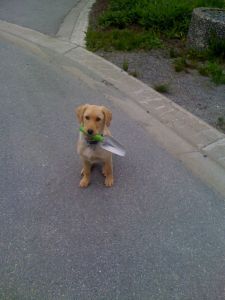 Along the trail to Gothic Basin in Summer 2010 (on a trip to begin to spread Boomer’s ashes in the mountains she loved): 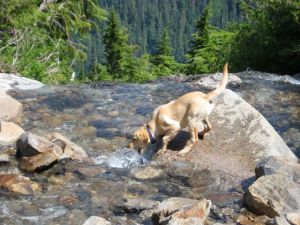 Our “white trash” fortifications to prevent her from getting onto the roof and chewing up the roof jacks: 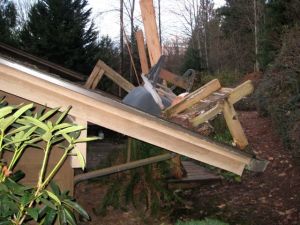 Video of her backcountry ski trip with Tobae, Sean and Sean’s dog Amico.  Tobae is holding the dogs up, Sean has skied down to take video.  (Whenever we play the video, Luna perks up when she hears Sean’s voice)

The low light of the year was son Mark, Facebook employee, insisting that a dog cannot have a Facebook account.  But as I read the terms of service, she will be eligible as soon as she is 13 (dog years!).  I really don’t care that dogs don’t fit the Facebook business model.

Tobae is coming to see that Luna is “The Best Dog in the World”!

This entry was posted on Sunday, March 6th, 2011 at 6:25 pm and is filed under Uncategorized. You can follow any responses to this entry through the RSS 2.0 feed. You can leave a response, or trackback from your own site.